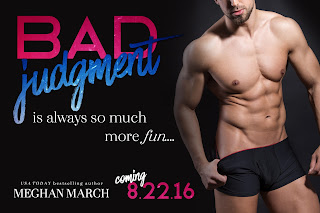 I can’t stand him.

He’s a distraction I don’t need.

She’ll say yes eventually because I’m not giving up.

Justine Porter is stuck between a rock and a stripper pole. She lost her law school scholarship, which means she has two choices to keep her life on track: strip for her tuition or tutor the most distractingly sexy guy in her class—the one she’s been turning down for two years straight. It should be an easy choice, but tutoring Ryker Grant could derail her plans to graduate with honors faster than two-for-one night at the Déjà Vu. Then again, topless has never really been her color.
She could take the easy road, just this once . . . but the deal has enough loopholes to trip anyone up.
Who knew they taught bad judgment in law school?

Popular posts from this blog

By Booklovers Hangout February 16, 2018
Title: Distorted Love Duet: Dark Intentions #1 Author: T.L. Smith Genre: Romance Suspense Release Date: March 20, 2018Release Alert
I loved him from the age of sixteen. Hated him from the age of eighteen. He disappeared at the age of nineteen. We started off as enemies, then fast became lovers. But our story isn’t a happily ever after. It was a story of a king and a peasant. Can you guess which I was? I knew we weren’t meant to be. You see, he fell in love with her first. He loved me last. I'm not someone's second choice. Not even for the boy who stole my heart. I'm someone's first. Now, I just have to remember that.

Review: What He Doesn't Know

By Booklovers Hangout March 16, 2018
What He Doesn't Know by Kandi Steiner
My rating: 5 of 5 stars

I am officially gutted from this story. I am done for. How will I be able to stand another book in this duet? Kandi's writing is absolutely beautiful and there is not a single book by her that I haven't loved. This book I am now going on record as saying is my favorite of hers so far and that is really saying something. Of course I am sure I will say that with her next book and the next book after that, because they are all amazing.

I don't want to talk about the storyline of this book, because I believe you need to read this story for yourselves. There is heartache and angst. There is love and moments that make you swoon. There is fun and steam. It has everything and yet I feel like it has so much more. This is such a stunning story and I am dying for the next book in this series!

“All of your ideals, your hopes and dreams…they cease to matter if you abandon them in your darkest hour. We have to see this through to the end.”
Jack McIntyre and Caroline Gerard have never shied away from a challenge. As dual commanders of the American rebel forces, they now face the greatest adversity of their lives. Every decision has permanent consequences. Relationships are tested and restored. Hard truths come to light. When the reality of their situation finally hits them, there is one thing they know for certain.

No sacrifice is too great for love.
***
*** Cecilia London is the pen name of a native Illinoisan currently living in San Antonio, Texas. She's filled several roles over the course of her adult life - licensed attorney, wrangler of small chi…
Post a Comment
Read more

UnderCovers
by Kayti McGee
OMG! This book had me laughing out loud!! Holding my stomach, rolling on the floor laughing. The characters were well written and I definitely fell for Spence, the minute he walked in the door. It was so fun and sexy and I am glad I was ...

An Act of Salvation
by K.C. Lynn
And we have another amazing book by KC Lynn!! I can't even begin to tell you how much I loved this book! I have so been waiting on this story. I was not disappointed. This story is suspenseful and heartfelt and I did not want to put it d...

Xavier Cold
by Michelle A. Valentine
After that cliffhanger from Phenomenal X, I wasn't sure where Michelle was going to take this book. I couldn't wait to find out what happens next. She did not disappoint!! I absolutely loved this story. I loved Xavier. You got to learn s...

LOVE on the Horizon
by A.M. Madden
Love on the Horizon is sweet and fun and you don't want to put it down. I loved the characters and I love the fantasy that this book leaves you with. This book is just an all around beautiful love story. I can't wait to read more from th...

Haunted: A Romantic Suspense
by Kiara Delaney
If you thought the second book in the series couldn't leave you anymore speechless than the ending of the first, you thought wrong. After the end of Ghostwriter, we were left wanting more, and Kiara delivers with Haunted. It is surprisin...